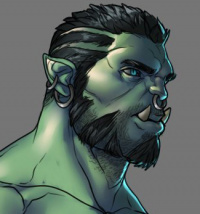 Spencer heads home from his strange encounter with Alan, Colossal Clothing’s mysterious and hot owner. He has gotten a new t-shirt to bring home, its magic granting great and fascinating changes to Spencer’s body.

Spencer’s walk home was for the most part the most boring part of his day. He walked from his grocery store to his apartment in about 15 minutes. He was kind of lucky that was possible and now with the prospect of getting a job from Alan his walks would be even better. He sighed in happiness, as he scratched his jawline without thought.

As he scratched, he could not get Alan out of his mind. Those strong but soft muscles pushing on every inch of the man’s t-shirt really made Spencer swoon in thought. He wondered what it felt like to squeeze those big breasts of Alan’s.

These thoughts had Spencer’s full attention as he entered his apartment. As he, without thinking, scratched his butt.

Spencer went to his room, placing his keys, phone, and wallet on his bedroom’s nightstand. He went over to the full-length mirror he had splurged on that one time, the two side mirrors bent to show his sides. He lifted his shirt, where the itchiness was the worse, and examined his average gut and chest. He tilted his head in confusion. * Man, I must have forgotten to shave myself.*

A light dusting of brown hair was present on his belly. He put his new shirt down and patted his gut a little bit. He felt a slight heft there. Spencer figured he must have finally put on some more pounds. Kicking his shoes off, he went to his bathroom, got his toothbrush, and started to clean his teeth.

Unbeknownst to Spencer, his gut was stretching his shirt out, the Viking logo tilting upward somewhat. As he spat his backwash out into the sink his gut pressed against the counter making Spencer freeze. He looked down in surprise, there resting on his stomach was no longer, just a regular old belly but a small ball gut. It poked out from his torso and Spencer watched it grew more. Then as if it knew it was being watched, the belly sped up its expansion. Soon the chubby belly rested on the sink counter, now a big hefty beer gut. It stopped growing, it seemed to be waiting for something. Spencer gripped his belly in his new shirt. He fingers sinking a bit into his new fat as he bounced it. The belly wobbled and jiggled. He could not believe his senses. He was fat! He had been trying to put on weight for so long and now for some reason, the universe had decided to grant his wish. He lifted his shirt, eyes widening at new flabby moobs, he used his right hand to grope one of them. The moob feeling like he was squeezing a bag of icing that was warm. He dropped his shirt and walked over to his full-length mirror again and spun his hips, taking in his enlarged love handles, his fat stomach, and his hefty moobs. He just could not believe this, and soon his disbelief turned to surprise as he felt his itchiness again but this time it radiated all over him. Arms, legs, gut, chest, face, and head all itched as Spencer saw in the mirror brown hair grow all over him. He ran his hands over his forearms, strands of long hair growing like grass up and down them. He raised his right leg forward and watched hair grow there too. Spencer then decided to take his shorts off. He unbuttoned them, taking a bit larger to do so under his big belly before the shorts fell and were kicked off. Underwear resided over a forest of leg hair as it grew all over calves and thighs. Spencer felt itchiness under his shirt and lifted it to watch as his moobs and chubby belly spread with manly hairiness. All over flabby skin, the forest grew, the moobs and belly covered in brown hair, top to bottom. Placing his shirt down he felt his face flourish with hair, a five o’clock shadow going to short beard to long then finally ending just between his chubby chest, the beard covering the Viking logo on his t-shirt somewhat. He then felt two strands of his hair twist and form two beard braids held together by appearing metal beads. He felt his hair on his head lengthen and flow downward. A braid tied itself over his flowing locks and another metal bead tied it together behind him. Spencer threaded his fingers in both his new beard and his new hair. It was so smooth like a professional had taken care of it.

He looked up from his examinations and admired himself in his mirror. He looked amazing! Flowing locks of brown hair, chubby belly, and hair all over. He took a moment to bounce his belly, something about the way he looked made Spencer think. He widened his eyes at the realization. He looked like the catalog model from Colossal Clothing. He looked up confused though because he recalled that the model had ginger hair.

Spencer’s confusion turned into joy when he noticed a discoloration in his new hair and beard. It lightened from his brown to ginger right before his eyes. He was turning into the Viking man who had worn the same shirt he wore now. Spencer wondered how in the world that Alan’s t-shirt had done this but that did not matter right now. He knew from his recollection that he had a few more changes left.

The thought coincided with a strong thickening in Spencer’s chest. His flabby moobs firmed up, as he felt under them building muscles. The shirt he wore strained at the expansion of his fat pecs. He was so sexy. Next, he felt the firmness spread to his arms. He flexed them a little over his shoulder and watched his biceps bunch up and tighten up in his shirt sleeve, the growth traveled down the forearms, making them thicker and growing his hands bigger so they looked as meaty as Alan’s had. Below his hanging gut, thighs widened, bugling with added muscle before calves strengthened and feet strained his socks.

He was now a chubby, Viking, strongman. He flexed his arms more and this action drew out the next change. He felt his body rise. He was not adding on muscle or fat but pure size. He felt his underwear stretch its elastic and the socks below that started to rip. He paid it no mind when those pair of socks tore and rested in tatters below his giant feet. The shirt continued to strain on his meaty pecs and fat belly. A strip of belly emerging above tight underwear and showing off the hairiness of his belly button. He picked up his round belly and wobbled it, the firm but soft belly bouncing at the movement.

The last, but not least, of all the changes started below this massive ball of a gut. Spencer let out a gasp of pleasure as his crotch filled up his cotton briefs. Balls sagged downward, bugling out his briefs, creating a spherical bulge there as his dick lengthened and stretched longer. When the growth ended he sported a gigantic underwear bulge. Spencer brought a meaty mitt to his bulge and squeezed it. The action causing a moan to emerge from his mouth. His dick felt so huge in his hand. He took his thumbs and stretched the already straining elastic underwear bands and lowered his briefs down. He could not see much over his gut but feeling his dick seemed to be about 10 or maybe even 12 inches long, and it was only soft right now! He pulled his briefs back up, loving the look of his bulge too much.

He was done. An exact copy of the Viking model. Spencer even now just noticing his former brown eyes now a beautiful sea green. He went and lifted his shirt off, giving it and Alan a silent thanks for his new body.

As soon as the shirt stopped touching skin though Spencer felt his body vibrate and all over himself his changes, like the wind, receded back to his former appearance. Hair receded and turning brown again. Belly and muscles shrinking and turning back to his diminutive chubbiness. He shrunk in height and size. His underwear no longer bugling out with his fat dick and balls. And like that Spencer was his old self again. He stared in disbelief at his rapid reversion. He frowned before glancing on his bed at his new t-shirt. * So, I have to wear the shirt to look that way. *

Spencer in a flash grabbed the shirt and slipped it on. After a brief second, he was thrown around in violent expansion. The changes came a lot faster this time around. His belly surging outward like a balloon. His hair flowing out and down like a waterfall. He shot upward as his size returned and down below his bugle came back with a passion; the crotch popping outward like a water balloon bursting.

Spencer swirled his hands over his returned torso, looking up at his appearance. He knew without a doubt that he was taking Alan’s offer for a job. Also, Alan had a lot of explaining for giving him this wonderful gift. But tonight Spencer was a sexy Viking and he was going to enjoy as much as he could.