The Beginning of the End

The Beginning of the End 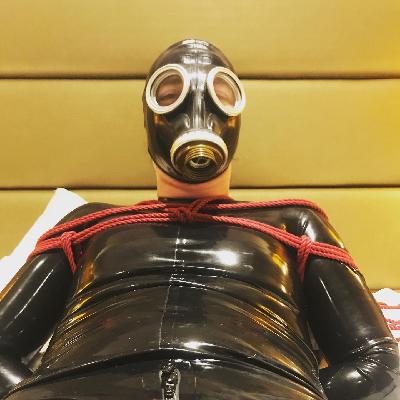 More tricks and treats for Jake, and more orders from Master.

Jake got home and undressed, standing there in only the rubber sheath. His arse was sore now, the walk home causing the butt plug to rub uncomfortably. But still, he was happy. He opened the new package his Master had given and pulled out a pair of rubber briefs. Tired as he was, Jake barely felt the rubber he slid it up his legs and settled it around his waist. Once in place though, a wonderful tingling shot through him and he moaned deeply. He reached for his phone and found a message from his Master, with an audio file attached.

Play this while you sleep, boy.

Jake hit play and fell onto his bed. He considered wanking, but his was still mourning the loss of his gauntlets and was exhausted from the night’s activities. He was asleep in minutes, barely even noticing the words being whispered beneath the white noise coming from his phone.

You love rubber. You are a rubber boy. You must always wear rubber.

You love to be plugged. Good rubber boys are always plugged.

You love rubber. You need rubber. Rubber makes you happy.

Jake woke feeling content. His phone had died during the night, but he felt like he could still hear the low hum buzzing around his brain. He reached for his dick and sighed as he felt the rubber. He rubbed his around his waist, enjoying the way the rubber briefs felt against his skin. He loved rubber. He was a good rubber boy. He put his phone on to charge and the began tugging at his dick.

Blissed out as he was, it took Jake a minute to notice the transformation that had occurred overnight. His cock had somehow merged with the briefs, and was free of them, his sheathed cock standing proud having merged seamlessly with the rubber around his groin. He reached under himself and checked the butt plug, and sure enough, the base was sticking out between his rubber covered cheeks. He loved the feeling, he loved rubber, and as Jake began to wank, he wondered what else his Master might have in store for him.

It was a chastity cage. He’d seen them online. His dick was straining, but the heavy rubber device kept his shaft trapped inside his body. Jake pawed at the cage desperately, but his dick was trapped, unable to feel a thing. He twitched at thought, his rubber nub bounced in delight and despair.

He was soon distracted by a feeling in his arse. The plug was shifting, pushing deeper into him. It pulsed, each time growing a little longer, a little wider. Jake moaned and arched his back as his hole was stretched and his dick tried to grow. Eventually the plug stopped growing but the pulsing continued, pushing on his prostate. He groped desperately at his dick but could feel nothing, so moved his hands to his balls, rubbing and tugging at them. That combined with his trapped dick made his insides feel full, and the thought of all that rubber deep inside him made him orgasm. It was an incredible feeling, his dick trapped but trying to release, and the waves lasted for half a minute. Cum trickled slowly from his cage, and Jake lapped it up.

Jake spent the rest of the day distracted and horny, fiddling with his cage and scrolling through rubber sites. He clenched his arse around the plug habitually, but he couldn’t get himself off. He found himself incredibly thirsty though, drinking plenty of water and then the piss that came afterwards. His cage leaked precum constantly and collected as much as he could to supplement his diet. He realised late that night, while he was rhythmically grinding his caged cock against his mattress, that he hadn’t eaten all day, or the day before, and he hadn’t had a shit in just as long. But that would mean removing the plug, and he loved being plugged, good rubber boys are always plugged. The concerns disappeared as his plug suddenly pulsed again, just once, enough to have him humping the mattress without thought until he fell asleep, setting Master’s files to play through the night once more.

Jake dressed for work and headed out, but his head wasn’t in it. Throughout the journey the plug would pulse randomly, even more so once he reached work. He tried to stifle his moans and the black jeans he wore concealed the growing wet patch in their front slightly, but he still felt conspicuous. When he had enough presence of mind to worry about such things, that is, and wasn’t grabbing his dick and thrusting in time with the pulses from the plug. His manager pulled him aside and started bombarding him with question. Was he feeling alright? Why hadn’t he responded to the texts about covering shifts? Was he stoned? Apparently he looked glassy-eyed and vacant, but all Jake could focus on was the rubber in and on his body. He stumbled through the conversation and was sent home, told to come in tomorrow with “a better attitude.”

Jake was barely out the door when his phone buzzed. It was from Master.

Come to the warehouse.

The door opened quietly, and Jake stepped in. He was in a foyer, a desk ahead of him with a door behind it, and stairs to the other side. The floor was concrete and beyond the desk there were no furnishings. There was another smaller door directly to his left. There was a note on the desk. Jake went over and picked it up.

Take the door on the left, the then enter the first room.

Strip and wear what’s been left for you.

Leave though the other door and follow the corridor right the way round.

Enter the room and climb the stairs.

Jake memorised the note and left threw it in the bin behind the desk. He entered a long corridor, with four doors lining the right-hand side. He entered the first one, noted the hooks mounted on the concrete walls, and removed all his clothes, placing them on the hooks. He stood there in rubber alone. His excitement was building again, like at the park, but this time he felt that it was more under control. On a metal table in front of him saw four long strips of shining black rubber. He picked up one and it unfurled slightly, revealing toes. He slid it calmly over his (left) leg, enjoying the feeling but mindful not to keep Master waiting. The sock reached up to just below his knee. He put on the second sock and reached for the third rubber item. It was a glove, and once on it covered him to just beneath his elbow. He put on the second one and left the room through the opposite door.

The corridor was long and u-shaped. His feet were cold, the thin rubber doing little warm them. He flexed his fingers in the gloves, admiring the shine but still pining for his gauntlets. Perhaps Master would return them tonight? He passed several doors but didn’t attempt to peek. He had his orders, and good rubber boys obey orders. The door at the end opened into a large room, computer banks and machinery blinking, with an area of floor clear save for painted numbers. A door to his right led into another part of the building. He walked past it all and up the stairs.

The room above was a copy of the one below, even down to the door Jake had entered through. The only difference was the second door, which lay on the opposite side of the room to the below. He walked across the floor and found the square marked “1”, and there he stopped, legs apart and hands behind his back. With his orders complete, Jake’s mind began to wander and his hole began to clench, shifting the plug and frustrating his dick. Master would be here soon, and he’d get new orders. He was looking forward to it.