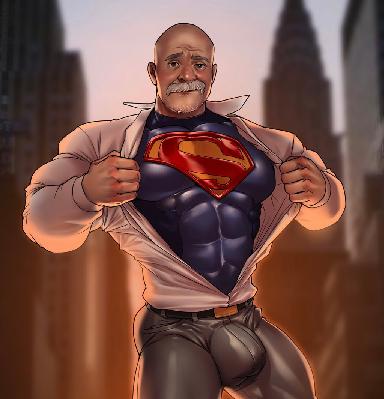 Copyright © 2005 absman420. All rights reserved. This story may not be reproduced or used in any manner whatsoever without the express written permission of the author.

Tying up some loose ends – and creating a web

Amazon Woman still felt the resentment. Even now, six months after “His Majesty” was sent blindly through the dimensional portal – thwarting His plan to take over the world – even now, none of them believed they’d been mind-controlled. Each of them stood by the assertion that He’d not altered their minds, just made them realize the truest desires inside themselves – made them all like Him. Somehow, He made their darkest fantasies acceptable. And the coincidence that ALL of them had the same truth? ALL of them were homosexual muscle-bottoms?

Just that. Coincidence. They were NOT being mind-controlled.

None of them had lost any of their size, either – not even Amazon Woman. All of them maintained their super-developed physiques, their aggressive muscles, their enhanced cocks. They received a lot of press – “New House Style for Superheroes!” the headlines read. “More power, more size, more skin!” “The Justice Club is out of the closet!” They became the caped-crusaders for queer rights. They were the grand marshals at parades – they appeared at political fund-raisers – they made cameos at weekend night spots, dancing it up with the crowds – they became celebrity spokesmen.

His non super-powered subjects, the several-hundred men transformed via the “Cycle One,” they maintained the castle as an immortal shrine, where they hoped, prayed, and dreamt of His return. In a way, He’d become the deity He’d always imagined Himself to be – Amazon Woman had only succeeded in creating a martyr.

There was still a warehouse-full of the magic “Cycle One” left. Not surprisingly, men continued to seek it out. Even knowing that it would transform them into brothers of a hopeless religion – even knowing their savior might never return – ordinary men put themselves through the induction. Man after man became a heavily-muscled lost soul.

Superion, the superhero’s superhero. A smart man. He’d publicly thanked Amazon Woman for “rescuing him from his plight.” Obviously, he’d said in speech after speech, he’d been under someone’s control, someone who’d forced him to steal diamond after diamond, to commit acts of wanton lawlessness. He’d even shed a tear.

But it was all a sham – and only Amazon Woman could ever betray it. Superion never believed himself to be mind-controlled by Rex, either. Like the rest of them, he believed Rex had done him a favor – Rex had brought Superion to his true-self. Given that, Superion believed that the thefts were understandable – the ends justified the means – Rex DESERVED a diamond throne. Obviously, it was the only thing opulent enough for His Majesty. Superion only corroborated Amazon Woman’s mind-control story so the public would forgive him, and allow him to operate without going to jail. That way, Superion retained the public trust, his societal standing, and was able to continue his efforts to fix the dimensional activator unencumbered. He was a smart man.

He had his pet-scientist – that brilliant Emeril Jefferson – working on the problem almost constantly. After almost two weeks of long, exhaustive, sleepless hours with no progress, Emeril suddenly found his second wind – along with almost sixty-five pounds of added muscle – which allowed him to work for much longer periods without sleep. Forcing him through the “Cycle One” program provided Superion with an almost tireless scientist in his back pocket. Better, Superion’s quest suddenly became personal to Emeril, too. And nothing motivated someone like the reward of incredible sexual pleasure.

The King was gone – long live Lord Superion. Though he felt awkward in the role, Superion took over his lost lover’s kingdom. The Castle became his home base, his fortress, as it were. His Majesty’s subjects needed someone to give them focus, someone to worship, though Superion was clearly embarrassed trying to live up to their expectation. He did find enjoyment in the group worship, posing in just his “S”-shield thong, but the day-to-day duties of running a kingdom soon wore thin.

Otherwise, life became an unfulfilled quest to regain his mate. And Superion wasn’t the type to admit defeat. They’d find a way to fix the device that Amazon Woman destroyed. If he had to scour the galaxy, he would.

There had to be a way to find Rex.

Six months since the Tragedy that had rocked the nation – the lights over the skyline of Manhattan twinkled like a city remembering its own beauty. They’d almost completely cleaned up, working tirelessly around-the-clock to remove the debris, but they still had a long way to go – even with the superhero’s help – to remove the shards of New York City that the terrorists blew up that day.

That’s not to diminish the work of the TRUE heroes – the firemen, the policemen, the laborers who did the most noble of the work – but the superheroes were in there, too. Nobody had had the kind of power-level necessary to stop the Tragedy that horrible morning, true, but they helped as they could.

Take Parker Peterson for example, known to the public as their cheerful, community Arachni-Kid. Two years ago, at the tender age of seventeen, Parker had accidentally been injected with an untested Arachnid Adrenaline Derivative during a school field-trip. Two fevered weeks later, he discovered his body mimicking the powers of the arachnids – he could scale walls; he had the strength of ten men; he had reflexes that made him almost quick enough to be precognitive. It seemed like a pretty good thing.

His muscles had grown. Skinny, geeky Parker Peterson gained almost twenty pounds of muscle since the accidental derivative – proportional strength of the arachnids, remember. He never got any bigger than one-seventy, but even THAT was a major improvement. Any larger, he figured, and the muscle would get in the way of his acrobatic fighting style.

Arachni-Kid was a street-level hero – he targeted petty thugs, muggers, druggers, rarely mixing it up with the cosmic bad-guy types, the heavy-hitters like Doc Apocalypse or Galaxion. Sure, he was capable of surprises every now and again – and almost every summer, some new bad-guy showed up that required almost every hero on the planet to get together and stop them – but mostly, like any nineteen year-old, Arachni-Kid was happy to kick back and criss-cross the city swooping on a webline, enjoying one-on-one crimefighting.

Tonight happened to be the latest in a series of sleepless nights for Parker, though. Raised by his grandparents since his own parent’s death, he thought of Granny Fae and Grandad Dan more as his parents now than the young couple he knew only from pictures and family stories. He loved his grandparents dearly. Then, to his horror, his Granny Fae was gunned down during a drive-by gang-shooting. He blamed himself. If he’d only driven her to the senior-center that night, he reasoned, instead of using her car to go to the wrestling match while she took the bus, she’d still be alive.

The funeral destroyed him. Even the consolation of his life-long love, the girl next door, the beautiful strawberry-blonde Terri-Lynn – with her pouty lips and perky breasts – did him no good. The house seemed so empty with just him and his Grandad Dan roaming around. He couldn’t stand it. He had to get out.

Tonight, like the last three since the funeral, he waited till Grandad Dan was asleep for the night, snuck out of the house and went web-swinging into the City, aching for something to distract him from his personal pain.

He was swinging over a series of rooftops in midtown when he became aware of a sort of vibration, like someone had set the sub-woofer too loud. It made his skin prickle – mildly affecting his early-warning arachni-sense. He traced the feeling to its source, the dim recesses of a back-alley.

There, floating about ten feet off the ground, was a shiny circle of light, an orb, an odd bulb. As Parker – a scientist at heart, remember – studied the phenomenon from the safety of nearby wall – about two floors above ground, the light suddenly shot open, grew, expanded until it became an oval with a six-foot diameter. Stranger still, it was flat. Like a pane of glass – or a doorway.

Before he even had time to contemplate it, the moment was upon him – and that this took him by surprise, with the speedy reflexes he possessed, is saying something. Before he could realize the phrase “dimensional portal,” there was a flash of light, a blink, and something fell from inside the oval disk. Something large. Then there was wind, heavy, heavy wind, a greater explosion of light, and the phenomenon was gone, leaving behind the dark, heaving shape on the ground.

It was human – Arachni-Kid could see that – and if it posed any danger, Arachni-Kid’s early-warning arachni-sense would be screaming. It wasn’t. Whoever it was, he was huge. Outside of The Incredible Mass, Arachni-Kid had never seen muscles so big. Well, he briefly thought, maybe that WAS the Mass laying there – if so, Arachni-Kid was gonna have a devil of a time getting him out of the city, especially after their last go-around. No, couldn’t be. The Mass would alert his arachni-sense.

Then this beast regained consciousness, slowly stirring and regaining his sense. No, he wasn’t The Mass, but Arachni-Kid had been mistaken about something else, too – this guy was bigger. Dressed in purple-spandex shorts with gold trim, golden boots and wrist-bands, a short cape – a cape? Arachni-Kid quickly thought. Nobody wears capes, anymore – otherwise bare, displaying those ridiculously over-sized muscles, his cable-thick veins. Somehow, a metallic lightning bolt was attached to his upper-torso, clinging to his pecs like it was a part of him, like aÊgolden tattoo.

The massive giant stood, trying to get his bearings, or maybe just trying to get his thighs to navigate around each other. He began to walk toward the open end of the alley, when Arachni-Kid said, from the height of the wall, “Hey, buddy. You forgot your crown.” Arachni-Kid shot a webline to it and swung it to the giant’s hand.

The muscleman looked up at him. “Hello, little spider,” he said, his voice deep and confident. “Thank you.” He easily pulled the webbing from the crown, putting it on his head. “Can you tell me where I am?”

Arachni-Kid bounced to the wall on the other side of the alley, displaying his speed and agility. “You don’t know from these lush surroundings?” Arachni-Kid said, with a gesture. “You’re in the great city of New York, your highness. Ever heard of it? Only the greatest city in the world?”

But the stranger was confused. “‘New York..?’” he said to himself. “This isn’t Megalopolis?”

This time, Arachni-Kid laughed. “Megalopolis?” he said, again moving. “Pal, you’ve been reading too many Superion comic books! I mean, us REAL superheroes appreciate the Distinguished Competition those fantasy stories give us, but uh… keep yourself firmly rooted in reality, Kingy.”

The big man smiled slightly, showing the tiniest line of teeth inside his goatee. “Rooted,” he mumbled. “Yes…”

Arachni-Kid suddenly felt very odd, as if he’d instantly gained a thousand pounds. Gravity strengthened, and Arachni-Kid could barely move. “What’s going on?” he said, just as the wall he was hanging on gave way, unable to support his weight. Arachni-Kid slammed into the pavement of the alleyway.

The big King walked toward him slowly, almost seductively. “Yes,” he said. “What a MARVELOUS universe I’ve found…”

He reached out his hand, and Arachni-Kid could do nothing to stop him.