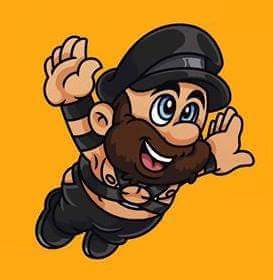 Mike’s mind enters a sexual simulation while his body is physically raped.

The draft officer continued to rub the silver chemicals all over the exposed area of Mike’s body. Under the touch of his rubber hands, his candidate continued to squirm slightly atop of the table. But the young man could do nothing. His wrists and ankles were securely fastened to lanyards. And more importantly, his head was locked down to the table itself. But Mike wasn’t even aware that he was in the testing chamber anymore. In front of each of his eyes, the draft officer had placed H.U.D. lenses that projected images straight into his brain. It created a simulated environment inside Mike’s mind. So right now, Mike thought he was in another room standing in front of a naked stranger.

The handsome man had completely undressed and stood naked before him. Mike couldn’t take his eyes off the man’s body. Most of all, he couldn’t take his eyes off the man’s hardened cock. With no other way to say it: it was simply huge. And more important, it was erect. Mike had never seen an erection before. He felt completely floored by looking at it.

Mike wondered silently: what do you do with it? What does it feel like? And as he thought these things, he had an overwhelming urge to touch this man’s cock. As these thoughts surface, Mike’s skull clamp received and processed his thoughts. The simulation began to respond.

The man walked slowly toward Mike. The man’s cock seemed aimed at him like it was a weapon. The tip of the cock got closer and closer to touching him. Mike felt both excited and uneasy. The excitement came from being just a step away from touching this man. And uneasy because he had no idea what was going to happen when he did touch it. Mike wasn’t sure what the man was going to do and fear crept into him. He tried to take a step back but discovered that he was frozen to the spot. The naked man reached both his hands out and touched Mike’s nipples. Suddenly, Mike actually felt something touch his nipples. And he realized that this was more than just a simulation. Somehow, this was really happening.

Outside his head, Mike’s draft officer began to stimulate his candidate’s nipples. He was monitoring the simulation via his helmet’s internal display. The interior surface of the face shield displayed everything that was happening within the simulation. And more than that, the computer was suggesting scenarios and actions the draft officer could do to arouse his candidate. There were also readings that displayed the candidate’s blood pressure, heart rate, oxygen levels, and his chemical saturation within the tub. But the most important piece of information was found on the right side of the display. There was an information bar that told the draft officer the possibility of Mike’s probability of becoming a donor. And as of right now, Mike’s chances of becoming a donor stood at 7.00177%.

Back inside Mike’s head, the man asked again: “So what do you want to do?”

Before Mike could respond, the man had disappeared and reappeared directly behind him. The man reached and grabbed Mike from around the waist. It was the first time Mike had been held. And more than that, he was being held by a naked man. The man’s touch exhilarated him. So Mike didn’t resist and allowed himself to be pulled back against this man’s naked body. The man moved his mouth up and against Mike’s ear. “Do you want me inside you? Huh? Do you want me to fuck you? Fuck you hard?”

Mike wasn’t sure what ‘fuck’ meant. He had never heard the word. But Mike could feel the man’s hands trailing down his backside. He was curious. The man’s hands slowly descended until they reached Mike’s ass-cheeks. Mike was completely bewildered by what the man was trying to do. But nonetheless, a chill seemed to race up Mike’s spine. And then he felt the man’s fingers slowly pry his ass cheeks apart. He felt the man’s fingers grasp both sides of his buttocks and spread them as if opening a double set of doors. And then quite unexpectedly, Mike felt something push up and against his ass. Mike realized for the first time that this man intended to put his erection into Mike’s body through his asshole.

“How does this make you feel?”

Mike was stunned. He could feel the cock against his ass. Then the stranger wrapped his arms tightly around Mike’s body, and pushed himself against the asshole. Mike felt the pressure build against his ass, but then finally the cock forced itself inward. Mike gasped. Instinctively, his body tried to resist the foreign object.

And Mike’s eyes whitened again. His brain was forced to obey the command. And on the table, Mike’s body relaxed. His ass softened. And the probe readied itself.

“That’s right,” whispered the man. “You want it.” And the simulated Model began to thrust himself in and out of Mike’s ass. Mike stood there perfectly still. His eyes were white. He didn’t move and allowed the simulated model to fuck him.

The program analyzed Mike’s brainwave patterns via the skull clamp. It knew whether Mike was enjoying it. Within seconds, the model determined the perfect fuck rhythm to maximize the candidate’s potential.

“How’s that?” The program didn’t need Mike to respond. It continued to analyze his mental patterns. It knew exactly where the candidate was at. Mike’s white eyes widened as the model started to thrust his cock harder. The model placed hands on each of Mike’s thighs as if they were handles. Mike didn’t respond but continued to stand motionless.

Mike’s brain repeated the command, and he whispered softly: “I will submit.”

In the testing chamber, the draft officer continued to make the table fuck Mike’s asshole. He specifically ordered the probe to massage the candidate’s prostate. Each time the probe pushed itself into the candidate’s rectum, his limp penis would slightly harden. But as soon as the probe retracted, the penis would fall limp.

This was normal with nearly all the candidates. The candidate’s were unable to produce an erection. With no sex drive, they simply lacked the desire within themselves to fuck or be fucked. The candidates always found the simulation pleasurable, but they failed find within themselves the sexual desire. The tendrils that had connected to the balls were trying to stimulate them into activity. The testicles, like muscles that had atrophied, remained dormant and non-productive.

Mike groaned as he felt his balls and ass be electrocuted. The skull clamp buzzed: “RELAX. FOCUS. OBEY.”

Mike had no choice but to obey. He relaxed again, and focused on the sensations emanating within him.

Inside his head, Mike was still being fucked by the Model. But then suddenly the sensations stopped. The Model had withdrawn his cock from Mike’s ass. The simulated man wrapped his arms around Mike’s chest and held on to him tightly. Mike felt slightly empty without the man’s erection inside him.

Mike’s body shivered and shook after having been fucked for the first time. The naked Model continued to hold onto its candidate. Several minutes passed, and Mike noticed that the Model’s arms seemed to be gripping his naked body tighter with each passing second. Mike tried to struggle against the Model’s grip, but he couldn’t break the man’s hold on him.

The Model spoke into Mike’s ear: “We’re going to try something different.

Then the Model brought one of his hands up over Mike’s mouth. Mike white eyes widened in terror. The Model’s hand pressed against Mike’s mouth making it impossible for him to breathe. As Mike’s naked body began to squirm inside the Model’s powerful bear-hug, the world around him began to blur and darken. Mike lost all strength. His arms felt heavy. The Model, now a powerful predator, gripped Mike’s body tighter against his own naked skin.

Mike’s head sank. His mind began to spin. His eyelids felt heavy. Then finally, his entire body slumped. And everything went black.