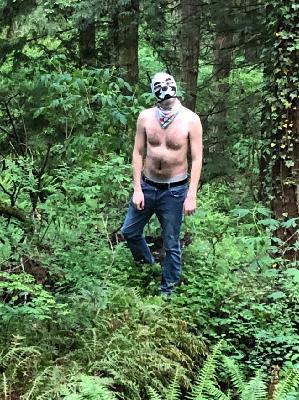 He was not sure what had happened. He had gone out to the bar that night planning to flirt with some girls and maybe get lucky. But just his luck the bar had been almost dead. He had decided to just have a few then leave when some stranger walked up and started talking to him. He could not remember what was said but suddenly he was following the stranger home. And stripping down to his underwear in the man’s car. And now he was fully naked on this bed raising his legs like some queer. A small part of his mind raged and thrashed against the man’s words but he could not seem to make his body obey.

Xavier squirmed and whimpered as the hand slowly went down his taint playing with the little hairs there and he felt one finger begin to slowly rub the entrance to his hole. A wet feeling on his hole was the only warning he got before the man’s finger began to slowly slip inside of him and move around lubing his innards. Xavier moaned and squirmed and the dildo slipped from his mouth as he tried to beg with the man to let him go but all that came out where more sounds of pleasure and a request for more please more.

With a smile the man began to move the toy back and forth with more speed and with his free hand returned to the boy’s nipples to play with the rings. He explained how even though Xavier had come looking for women he was clearly a little bitch boy marking himself for play with those piercings.

The toy moved in and out of Xavier’s hole and began to grind across his prostate on its path in and out. He panted and leaked more pre across his chest and began to beg the man for more. He needed more. His body was craving more. He needed this man inside of him. He began to thrust against the toy and whimper louder begging the man to give him more, well internally seething at this violation of his person

The man smiled and the toy slowly made its way out of Xavier’s hole. The hairs glistened with spit and lube and his newly opened hole flexed hungry for more. The man smiled as he climbed atop the bed and took Xavier’s ankles in his hands and spread him wider. Xavier felt the man’s cock approach his hole and push inside of him straight to the base. Then man began to fuck Xavier hard calling him a little bitch and explaining how Xavier was going to become his new rent boy. He would post all around pictures of Xavier taking cocks up his hairy hole and down his throat and men would pay for the pleasure of cumming in and on him.

Xavier panted and moaned like a whore and the small spark inside of him slowly began to fade, Yes, he would be this man’s whore. He should be a whore. Look how quickly he presented himself to be used. He nodded and swore himself to this stranger. His daddy. His daddy would take good care of his whore.