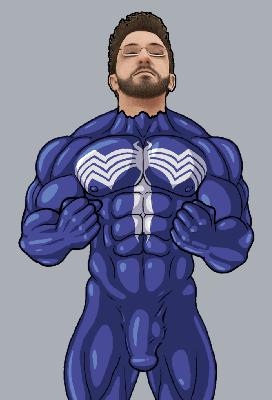 It didn’t take Mark long to have two hugely muscular guys fucking him. One of them was ramming his cock into his arse while the other was shoving his into his eager mouth. Mark’s arse, still framed by the black jockstrap, was really clenching around the invading cock making the guy moan loudly. It was something he had never experienced before, this hole felt so tight and good, it was almost as if it were sucking his cock. This guy was incredible, and watching him blowing his friend Joe was even more arousing, he was really working his cock well.

Alex was one of Mark’s best friends, a bit of a nerd like him, incredibly kind and thoughtful, maybe even too mach. Mark always thought that things could be better for Alex sometimes if he were a little more daring and impulsive, he was too careful, he always overthinking before actually doing anything.

What Mark didn’t know about him was that Alex had a terrible crush on him. It was something that had developed over the years but recently it had become something terribly and painfully sexual for Alex. He would secretly jerk off thinking about Mark increasingly often and couldn’t help feeling bad sometimes because he knew Mark didn’t fancy him in that way, his feelings were clearly unrequited and that’s why Alex was keeping them very well hidden.

Alex was thinking precisely about Mark when he received a weird message from him. They hadn’t met for some time now, since Mark moved to his new place, and now he seemed to be panicking and needing his help? What could have happened?

“Please, just come to my place, I need your help. I don’t know what’s happening to me!” was all Alex got for an answer.

And so he went to the address Mark gave him, knocked on the door and heard Mark saying “It’s open, come in!”.

For a moment, Alex thought that there was somebody else in his friend’s apartment; there was a huge muscular guy wearing only a jockstrap and a harness. He felt terribly awkward, where was his friend? Had he caught him doing something with this guy? Impossible, Mark was definitely not that kind of guy.

“Alex, please, don’t freak out, you have to help me.” Mark said and suddenly, Alex realised that this guy was his friend, but how? No, that could not be. How? He had seen him only a few weeks ago. Maybe he had secretly been going to the gym? But, for years? Was he on steroids? Impossible, it was Mark, and yet, he was seeing this incredible body opposite him, so big everywhere, with such incredible pecs, the harness seemed to accentuate them so well, he would love to suck those perfect nipples right then and there.

Alex couldn’t believe what he was seeing, his friend Mark had always been a terribly cute but at the same time average guy, but now there was a huge muscular monster who claimed to be Mark just there… and that jockstrap, god, such big pouch and so tight, it was too good to be true, Alex had dreamt about something like this for years.

“It’s these things, I can’t take them off!” Mark said while he tried to remove the jockstrap. “They’ve done something to me and I can’t control myself! I’m not like this!”

“What… what has happened to you?” Alex managed to mumble still unable to fully understand what he was saying.

“You have to help me, please. Maybe between the two of us we can find a way to take this off.” Mark said while he got closer and kept trying to remove his jockstrap. Unaware of his own actions, Alex kneeled next to him and tried to get a grip on the straps but they seemed fused to Mark’s body. The fabric felt so smooth, though. His hand followed the strap across Mark’s waist until it reached the pouch of the jockstrap. Alex had Mark’s bulging crotch just a few inches away from his face, and it looked so big… There was something unbearably alluring about it, he needed to touch it, he needed to feel it.

“What are you doing?” Mark asked without opposing any resistance as soon as Alex’s hand began to caress his package. Alex felt his friend’s cock beginning to grow, he wanted to know how big it could get.

“No, Alex, no, stop, not you…” Mark moaned but placed his hands on the back of Alex’s head and slowly pressed him against his growing crotch. Alex understood the suggestion and threw himself to lick and suck Mark’s bulge through the elastic fabric. The taste was incredible, he had never experienced anything similar.

While Alex was trying to suck his friend’s cock through the fabric of the jockstrap, Mark’s consciousness was being taken over by his sexual arousal, he was no longer entirely aware of his actions when he felt he had something on his right hand. Increasingly incapable of stopping moaning, he opened his eyes and and discovered that he was holding another black harness. Where did it come from?! It was similar to the one he was wearing but the bands seemed thicker and sturdier. Mark suddenly panicked but couldn’t control his own hand when it rapidly approached Alex’s back, he couldn’t even say a single word of warning before the harness appeared to become alive and put itself on his friend.

Alex immediately felt as if a huge force were hugging him. He stood up and realised that his t-shirt had somehow vanished and he was now wearing a tight black harness and started to feel that something was penetrating his body from the harness, some sort of presence or will was taking over his body and mind. That something extended throughout his whole body, he could feel it taking over every limb and muscle, and suddenly his whole body became incredibly tense.

Mark did not know what to do, he witnessed how his friend was being possessed by the same thing that had transformed him but was too stunned by his own arousal to react, there was something secretly and terribly hot about watching his best friend become a massive stud like him.

And so it began to happen, Alex’s muscles began to grow to huge proportions. His jeans disappeared and his quads and hamstrings swelled giving him massive legs that supported the growing torso that soon displayed enormous slab-like pecs and rock-hard abs. His back became wider, his shoulders jutted out becoming two boulder-like spheres and his arms grew thicker as his biceps and triceps swelled to huge proportions.

However, there was something deeply different about Alex’s transformation; unlike Mark, Alex had always secretly dreamt about becoming a huge muscle-bound stud, he had always secretly envied all those guys who seemed to be only concerned about building a perfect physique and fucking. Alex wanted this, and that changed everything, he would become a willing and worthy vessel of the force that was possessing him.

Mark was struggling with himself while witnessing his friend’s impressive transformation. The last thing he wanted was to spread his possession to Alex, he was his best friend, but at the same time, he was becoming such muscle-bound stud, so powerful, so dominant, his bulging pecs were beginning to be covered by a thin layer of hair and on his perfectly shaved face was now growing a full beard. God, he was so impressive! He needed his huge muscles hugging him, pressing him tightly and his cock inside him, filling him up. Alex’s cock was still concealed by his underwear but it was clearly growing as well, it seemed so thick and long.

“Yeeeaaah!” roared Alex while tattoos appeared on his huge pecs and delts, and two black wide arm bands wrapped themselves around his still growing arms while he kept roaring. His harness began to expand, two straps grew from each of the metallic rings on the side of his pecs and expanded down the sides of his torso towards his crotch. Suddenly, his underwear disappeared and Mark watched his friend’s growing cock unfolding before him. A cockring appeared on it and the two straps coming down from the harness latched onto it capturing a permanent erection.

He put his hands on his head while his whole personality was being reshaped, he was becoming the dominant top that Mark craved, utterly embracing his possession.

“Yeeees!” Alex roared while he flexed his huge muscles, the size of his biceps was astonishing. Mark needed them hugging him, pressing him tightly against Alex’s bulging pecs, he needed to submit to this muscle-bound stud, let him take control of him, dominate him and use him. And his cock was so unbelievably thick and long and so perfectly hard, he had to kneel and worship it. Yes, this was the dominant alpha he needed.