The original author of this series got notified about this new chapter!
He will review it and if he's happy with it, he will publish it so becomes visible to other people.

Everyone can contribute to this series. Please click "Add chapter" below to add your own chapter to it! 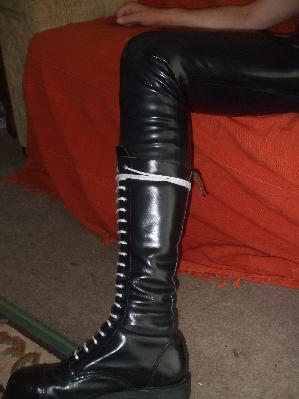 Copyright © 2021 Malskin. All rights reserved. This story may not be reproduced or used in any manner whatsoever without the express written permission of the author.

The LATEXATRONS has been in space for eons

This was inspired by photos I have seen on the net, I hope that you enjoy the story, please leave comments, I have left this open for others to add chapters if they want to.

The klaxon was blaring:

**ATTENTION! ATTENTION! The ship is under attack, all Space Marines to your stations. All other personal, we are now in Alpha 6 protocol! **

Protocol Alpha 6 means that if you’re not part of the space Marine Corps you are to stay where you are, e.g. if at your work station you stayed there and if you’re in your quarters likewise you stayed there. All rooms went into automatic lockdown until the crisis is over.

I was at my work station. This was my first assignments into space. I had not long graduated, coming top in my group at the space academy, it was my first off world experience. I remember my family seeing me off; they were so proud that I had come so far. Here I was in one of the maintenance hubs. It was not a large room, just room for one person and the equipment.

There was not much to do but wait. I sat down in the only chair in the room. Above me was the ventilation shaft.

I did not feel it at first, a drop of black liquid fell on the back of my neck. When the second drop hit my neck, I used my hand to feel what it was. I looked at my hand, a black spot of what looked like liquid Latex. I tried to rub the black liquid off, but it would not move. Another larger drop hit me in the same place, this time I felt a stinging sensation. The pain increased, followed by another larger drop. This one made me freeze in place, a total numbness overtaking my whole body.

I then heard voices in my head, coming directly into me, – no one else was in the room, I sat where I was with my eyes looking directly in front of me. “We are LATEXatrons,” the voice said, “we have been floating in space, for eons. We need bodies to make ourselves complete. You have been chosen to be the first of a new species. You will become the leader of our invasion force.”

Somehow, I managed to get to my feet from the chair I had been sitting at. I could feel my uniform dissolving, still looking ahead with no thoughts of my own, my past life flashed before my eyes. My family, seeing me off, my friends, the planet that I came from.

With one last thought they were gone.

With all thoughts out of the way and being totally naked, the black liquid that was on the back of my neck started to spread over my entire body, first covering my chest and arms, then each of my fingers was encased. It carried down to my crotch and encased my cock and balls, which increased in size. The sensation felt like nothing I had felt before My cock sprang to life, becoming rigid. I was moaning, in total bliss as the Latex encased that part of my body. The tip of my cock started to produce black pre cum. (This I found out would be one way to convert the rest of the crew).

The rest of my body was soon encased in the black rubber. The last part of my former body was my head. The Liquid travelled up from my chest to my head. In an instant, my head was covered with my new skin of black shiny latex, a gas mask formed where my face used to be.

The voice deep inside my head was telling me that I was now the leader of the invasion force, and that our numbers needed to grow. My brothers also needed hosts. My mission was to bring all the other members of the crew under our control.

I released the lock on the room and stepped into the corridor, I knew where I needed to go: the control room. Once I have converted the captain of the ship and the rest of the control room staff, those left would be rounded up and be subdued, My brothers could be released and gain a bodily form. We LATEXatrons would emerge from our long sleep just floating in space. This ship will be the rebirth of our species. We will the go on to release the rest of my brothers and conquer the rest of this part of space.

The time had come for the rebirth of the LATEXatrons. The bridge crew were easily overpowered. The captain would be the first to be converted into a LATEXatron.

I over rode the door closure to the control room. As I suspected, only the Captain and another crew member were there.

The captain turned round to see who had entered the control room and was surprised to see a human figure encased in rubber. He did not react quickly enough, giving me time to shoot a jet of liquid Latex directly into his face, his mouth was covered in seconds and he froze exactly where he was standing. I turned to the other crew member and did the same to him.

Once they were captured, I walked up to the captain. “Captain, let me introduce myself, I am the first to take on this human form, I was a member of your crew, now I am a LATEXatron, the human part of me no longer exists, I am the first of my kind, we have been floating in space for eons just tiny modules of Latex. We detected your ship in this part of space. It seems that our detection by your censors did exactly what we wanted. We wanted to create a distraction knowing that you would go on high alert and send your people to protect the strategic parts of your ship, what you did wrong was not to look at the non-strategic parts of the ship. That is how I was taken over.”

“Now it is time for you to join us. You will start to feel the Latex covering your mouth to heat up. This is only the beginning. Next you will feel sharp pains entering your skull. This will erase your humanity, leaving a void. That way one of my brothers can now take its place as you become his Host.”

Once the process had started, the uniform of the former Captain of the ship started to melt away. The Latex started to flow over his body, starting with the neck then the chest until it reached his crotch. His cock became rigid like mine had and his balls increased in size. Even though his mouth was covered, I heard him moaning as the Latex covered those parts. Like me, the host was enjoying the feeling, as he was transformed into a LATEXatron. The Latex carried on over the rest of his body. In no time his body was covered in shiny Latex. He was still totally frozen while the process took place.

Looking over at the other crew member I could see terror in his eyes as he watched the Captain transform into a LATEXatron. “Don’t worry, you will be joining the Captain very soon and become like we are, I assured the now terrified crew member.

Thirty minutes after I had got into the control room the former Captain had joined me to become second in command of the re birth of our species. Not long after the other crew man emerged from the Latex cocoon that had formed over his entire body. His skin had been replaced with shiny Latex like the both of us.

“What is your designation” I asked the former Captain, he answered, “I am your second in command and I am loyal to you, My leader.” He went on to say that we needed to free our brothers from their endless floating in space, from what I understand, of this host, this space ship has over 100 humans on board, they will become like us. And the beginning of our invasion fleet.

“So where shall we begin with the conversion of the rest of the humans on this ship?” I asked my second in command. He responded by saying that the head of the Maine Corp on board would be a good place to start. He will be able to use his training to round up the rest of the crew, once he is converted, we can go on to mass convert the others on this ship.

With that the former Captain, did something to the control panel and stood down the rest of the crew. He announced that the training exercise was over, and that the crew had responded well.

He then opened the cargo bay doors so the rest of our kind could enter the ship.

He instructed the senior space marine to report to the control room, for a de brief.

Sometime later, there was a knock on the control-room door. The other crew member who had been converted waited on one side of the door for it to open.

As soon as he stepped into the control room, he saw the figures of two humans wearing what looked like Latex suits. Before he could react, the other former crew man hit him full force with liquid Latex and sealed him inside a Latex cocoon. It would take about thirty minutes for him to emerge as a LATEXatron, he would use his skills of his former Host and then take his place with us as head of the military side of our invasion force….. The re birth of our species had begun in earnest ………….

The original author of this series got notified about this new chapter!
He will review it and if he's happy with it, he will publish it so becomes visible to other people.

Everyone can contribute to this series. Please click "Add chapter" below to add your own chapter to it!
New Comment