This is a community story!

Everyone can contribute to this story. Please click "Edit" below to add your part! 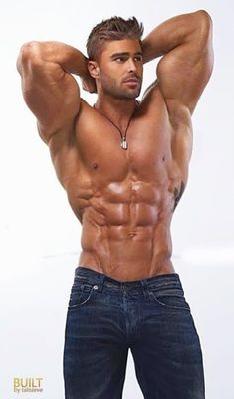 Steve learns a lesson that you have to pay attention to which bills you decide to pay.

Steve had enjoyed an amazing night out. For the first time ever, chicks were digging him. Of course he was a terrible dancer, but they didn’t care because his body was flawless. He got so many numbers in just a few hours and it was all thanks to Jack.

Steve had heard of this guy who could hook people up with a flawless bod, but he didn’t really believe it at first. Still, he thought he’d play along. He went to the address he was given and scoped it out. He remembered being led into a large house and saw this naked dude on the couch with balls the size of melons. Why he sucked that massive monster of a cock was still something of a mystery to him. Maybe he had always craved to have more than the skinny frame he was born with and would have tried anything to get bigger. Maybe there were so many muscular guys around the house that it seemed like truth in advertising.

Regardless of why he sucked that cock he was amazed with the results. With every gulp of cum, fresh muscle had piled on his frail frame until he looked like a professional body athlete. He barely fit any of his old clothes. If they hadn’t stopped him from drinking more, he wouldn’t have been able to fit into them at all. When it had come time to pay up, he told them that he hadn’t brought any money with him. He simply hadn’t taken it that seriously. He was afraid they would be furious but Jack just laughed and said it happens. “Just be sure to have the money here by Friday and we’ve got no problems”.

So he had ended up giving Jack an IOU and thinking nothing more about it. Day after day, the more he looked into the mirror the less he had cared about paying Jack back. Clubs were expensive and he was having a blast looking like a super model. Friday came and went and he’d heard nothing from Jack. “Hell, how would they even know where I live,” he told himself.

Today marked week three since he had his body juiced up and he really didn’t think of Jack at all anymore. He’d started to believe all of the lies he told the chicks at the bar. This was who he was, the was the body he’d worked for.

He walked into his apartment with new girls he had met at the club one night. There was a chick under each arm as he flipped on the light. However, there was more than the furniture to greet him. Five insanely large men were standing in his apartment. “About time you got home, Steve. I was worried I was going to have to waste my entire night in this dismal shithole of yours.” There, sprawled out on the couch, completely naked, was Jack. He was exactly the same as he remembered him. A perfect muscular frame with a hose-like cock draped over one of his legs and soccer ball sized nuts splayed out on the furniture.

“Whoa, what the…” Before his alcohol-addled brain could figure out what to do the door was slammed behind him by another huge guy who popped out of the kitchen.

“Well…? You said you’d have the money by Friday and it’s… ohhh… nearly a month later.” Jack snapped his fingers impatiently.

One of Steve’s girls piped up. “You know I think we’re interrupting something important and I think we should…”

“Oh shut up…” He looked to either side of them. “Bruce, Ty, throw the chicks in the bedroom until we’re done and stay with ‘em. I don’t want them calling the cops. Take their phones.” He looked at the frightened girls. “Oh don’t worry, you can do whatever you want in there as long it’s quiet until we’re done.” Two of the body guards led the women into the back bedroom.

He focused on Steve. “You know I’m running a business and I keep running into this problem that guys like you don’t seem to want to pay.”

“Nope. Not how this works. You’re already three weeks late. You know we checked this place over. They may look like meat heads but my colleagues in the other room there are crazy good hackers. They used to break into banks before they started working for me.” Jack chuckled. “Turns out, you made no withdrawals from the bank, no checks cashed, no nothing. We kind of got the feeling you weren’t planning on paying us back.” Suddenly there were groans coming from the bedroom. It seemed as if the girls were pretty satisfied with having the body guards as companions.

Jacked stopped for a minute to listen in. “See? That could have been you in there. Instead two strangers just stole your chicks on your own fucking bed.”

“Look just give me a…” He was cut off instantly.

“A chance? Jesus, don’t you all sound like a broken record.” Jack said as he got up and walked over to Steve. His giant nuts swayed from side to side against his legs as he walked. He leaned against him, pressing him against the wall. “You realize in order to come here I had to put on fucking sweat pants and get in an SUV. You know how much I fucking hate wearing sweat pants?”

“I mean… yeah… it seems horrible. I’d never wear pants if I looked like…”

“Like me?” He said pointing to his melon sized nuts. Then he looked up and smiled. “But that’s an interesting idea…”

“Idiot…” Jack groaned, then he shouted to his unoccupied henchmen. “Guys, bend ‘im.” The four remaining guys were so huge they dwarfed Steve even in his enhanced state. They easily pulled his clothes off and spread him over the couch.

“You like free product don’t you? I’m going to set you up with more than you’ll ever need.”

Steve tried to protest more but one of the guards shoved one of their fat cocks into his mouth. He wanted to spit it out but instinctively began to suck it. “Surprised?” Jack laughed as he pressed his huge cock head against his victim’s hole. “Once you’ve tasted me, your body will suck from anyone trying to get more.” With that he began to penetrate Steve’s virgin ass.

Steve’s balls began to swell as if they were being inflated like a water balloon. He pulled his mouth off of the spurting cock in front of him and groaned. “Awww fuck, what’s happening!” Jack laughed and signaled for the body guard to shove his face back on the dick.

“Don’t worry about it.” Jack said, slapping his ass as he pumped him still fuller. Time passed quickly. Steve’s dick thickened and continued to grow, he could feel it widening to a two-liter bottle and pressing against his chin. He pulled his mouth off of the cock in front of him yet again.

“God… what’re you doing! It’s too much!” And once again his face was shoved back onto the cock.

Eventually, after hours of fucking, Steve’s cock grew so huge that it crushed the couch beneath him. His balls splayed out like two small cars on either side of him. Jack pulled out of Steve with a grin. Steve’s junk weighed more than a tractor trailer, barely fitting in the apartment, and despite all of his muscles he was completely immobile on top of the crushed remains of the sofa.

“Think we should have left him like that for the cops to find?”

“He’s not gonna talk. After all that I’ll be surprised if he remembers his name.”

This is a community story!