Category: Alien   Tags: #alien #celebrity #possession #mind control #straight to gay #pictures
Copyright © 2020 Grant Spiral. All rights reserved. This story may not be reproduced or used in any manner whatsoever without the express written permission of the author.

A species unknown to mankind thrives off possessing men and climbing social ranks via sex.

This story is a somewhat older piece of mine for which I recently got a request to write a sequel to (see part 2). Since both were too short to post separately, I have to put them together and post them in one post. They’re posted on my tumblr along with the rest of my work. Hope y’all enjoy, I hope to hear from y’all :)

Oh wow, I kind of forgot to explain what my deal is, didn’t I. Well, what I am is not of importance. Nobody knows that my species exists since we’re with very few, so we have not been named. Naming ourselves would be weird. According to this human science called ‘biology’, we are considered a parasite or an std, but that sounds so negative. We improve lives for most of our hosts, keyword most of them. The other ‘parasites’ and I are very competitive, we thrive on showing off. So what better way to show you’re the best body snatcher than by trying to become more important socially than all the others! Our hosts never remember what they did during the possession and usually fabricate some memories to make up for the lost time. Before they even wake up, I’m long gone, living life in my new body. I’ve wandered around the planet for so many centuries that I can’t even remember my first host or how I even got on this planet.

A few days ago I was inside of this straight construction worker when a cute little twink walked by. He got me riled up in a second and I took a pic of him, telling my crewmates to look out for him. Later on the day, he walked by again and since it was the end of my shift, I clocked out and followed him home. He got inside of his apartment and before he got to close the door I shoved myself inside and quickly took out my dick. The little resistance that was present instantly evaporated and he started working on my cock. Things of course quickly got super hot and in about 5 minutes I was pounding that sweet ass into the mattress and now -a few days later- that same ass is laying in front of me.

I access this jocks memories and I know I’m called Alan. Damn, he’s so straight! Being some celeb sounds like a great way to get me access to handsome and important men. I remember all the sets and all the fame, all the hunky celebs that I hung out with. I’m glad that my possession of someone makes them irresistible to my host-to-be, cause damn Alan’s such a straight white guy! I won’t have any problem with finding a hot new mate though, but I do want to stay into this community. I worked my ass off to get here. Okay okay, it was pure luck that Alan entered the same bar where I was prancing around, trying to get that huge twink ass fucked. But I mean, I still had to look him in the eyes and get that cock of his in me! 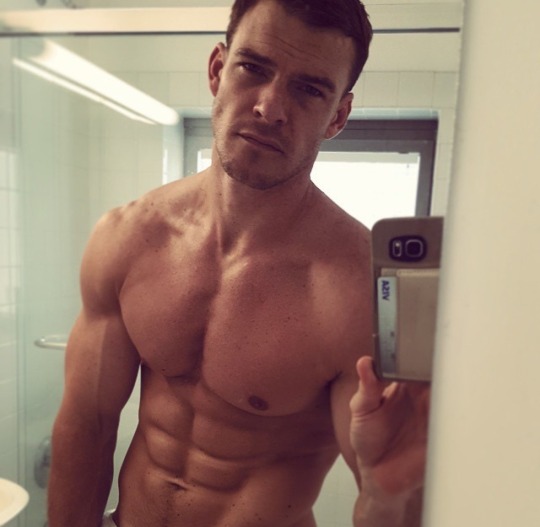 I hope I still have Brenton Thwaites number on my phone. I’m barely B-list now, and since I’ve done quite a few movies with Brenton, I bet I can get to all the hot Chris’! I just have to quickly make a Grindr profile… Behind me, I hear a door creak open and I turn around in shock. “What are you- Alan Ritchson?!” We stare at each other for a good minute before he goes to grab his phone and tries to snap a picture of me, but when I realise what he wants I’m already turning around. “Bye!” I yell at the top of my lungs, dashing through the door. Whoops. Well, I’m kinda sorry Alan, good luck getting out of that scandal with a fucking eye-witness! I guess I can’t wait to meet up with Brenton, I have to do it tomorrow as this body will be compromised as soon as the tabloids hear about it! But of course, tonight is reserved for playing with the hearts of a few gays and milking my dick dry!

“I didn’t do anything!” The young guy was screaming bloody murder while the cops pushed him down on the street. “Sir. Multiple people have called in for public indecency, all stating that a ‘caucasian male matching your exact description’ was having intercourse in the park. We have to take you with us for questioning.” The young man was visibly distraught. “Do you know who I am?! My dad’s a big deal!” He kept going while the cops rolled their eyes and called him in. It was very fun to look at, seeing yet another faggot get utterly destroyed by the cops. I fished out my crappy phone to take a vid for the wifey at home, who was gonna laugh her tits off. I hit send and after a few seconds, I saw the ‘crying while laughing’ emoji’s rolling in.

“Could you get a little closer? He seems familiar.”

Ugh, the things we do for the wife. I pushed myself through the small crowd of people that were watching the scene so I could get closer, but of course not too close.

After a minute or two of stammering, he gave up. “Ugh fine. I guess I have to start over.” He started looking around, probably looking for another victim so I laughed at him. Then I hunched down and snapped a pic of him looking right into the camera. It was a clear pic of him so I sent it before looking back at the fag. He smirked and said “I guess you’ll have to do for now…” 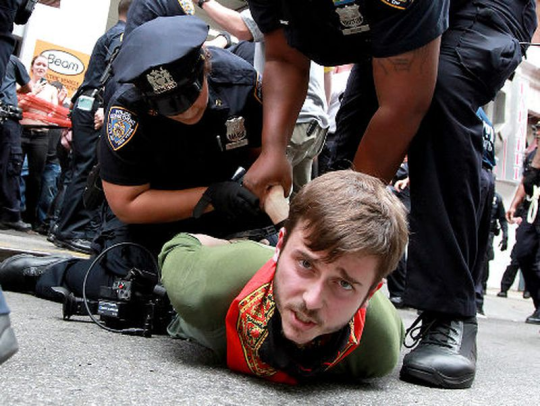 His eyes turned a weird shade of pink and I felt a calm wash over me. Without thinking I ducked under the policetape, immediately hearing the cops ask me to leave. I pushed him aside and walked closer to the lad, not fully understanding why I was doing this. Before the policemen could react I fell on my knees and made out with him, until my vision started to fade and I felt some hands on my wrists.

“Sir? Are you okay? You fainted it seems.” I shook my new head and felt my new double chin move. I’m so fucking mad that I had to restart and go into this old disgusting homophobic pig’s body, just because some parents can’t enjoy some hot gay public sex. And now here I was, sitting cuffed to the door on the back of the ambulance while my old body was a few meters away from me, trying to comprehend what just happened. My phone beeped and I saw a few new messages from his wife.

“Wait I see you on tv! I’ll dvr this so you can watch it later.”

She’ll be in for a surprise later. I smashed the phone and tossed it, getting a weird look from the paramedic. “Wasn’t working anymore. Crappy new technology.” God I hate having to pretend to be a boomer. The decent looking paramedic asked again. “Are you feeling okay?” I took another good look at him. He was no model for sure, with his hunched back and boney limbs, but I guessed he was a huge step up from my current form. “Actually son, my back really hurts. Could I please lay on the stretcher?” The paramedic was in doubt for a second until my acting skills convinced him to fetch a cop to release me from the cuffs. The same cop I pushed off begrudgingly came over to let me out and I winked at him. It’s a shame he was called back to the now screaming young guy.

I looked at my handsome old body once more and sighed before turning around and closing the doors behind me. Luckily the moaning and sex sounds were drowned out by the loud screams.

This story could use more ratings!