Young superhero Corey Cooper, A.K.A. Tempest, has a fantasy of falling under the control of the supervillain Imperious. Little does he know that his fantasies are about to come true in ways he never could have imagined. 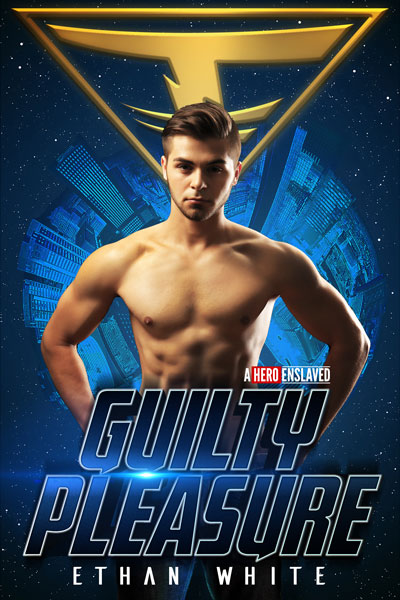 “You’ll… You’ll never own me completely,” Corey grunted. He didn’t remember a shred of Imperious’ secret, nor even did he remember that he had already surrendered his entire being. With a great effort, Corey managed to pull his hands off Imperious’ thighs. “I might not win… But I won’t make it easy. I won’t stop fighting. I will resist you every step of the way,” he said, letting his hands fall at his sides.

Imperious’ eyes glowed a faint blue color as the villain’s sharp gaze seemed to bore right into Corey’s soul. “You would not mind looking down for me, would you?” said Imperious.

Corey swallowed audibly. Fighting his own body was futile. He looked down, just as Imperious had suggested. The only thing he could see in his field of view was his cock, ramrod-straight and dripping with pre-cum. “Is fighting really what you want to do? Is that what you really want?”

A shiver went down Corey’s spine as Imperious’ foot came into view. Imperious’ big toe traced his cock from the base to the sensitive tip, coming away with a glistening strand of pre-cum. “Or could it be that this is proof that you are just saying that because you think you have to?”

A quiet moan slipped past Corey’s lips before he could stop it. Pre-cum dribbled onto the rug. He looked up at Imperious, dazed as he stared right into those softly glowing blue eyes. “Why not be honest with me? You do not need to lie… You have nothing to gain from lying. I already have you in my grasp. Your friends are not coming. Do you not think it would be easier for you if you just do as I say?”

Corey shivered. Imperious’ silken words had an allure to them that he had to resist. “Only because you made me feel that way,” he said, through gritted teeth. “I’ll never trust you,” he said.

“Maybe not,” said Imperious. “But there is no reason to lie. Would it make you feel better if I promised not to lie to you as long, as you do not lie to me?”

It wasn’t much, and it didn’t inspire a lot of confidence, but it did make Corey feel better. He didn’t think he was going to get much in the way of give-and-take proposals from Imperious. And this way, he had a chance to learn more about Imperious. “Only if I get to ask you questions, too,” said Corey.

Imperious seemed to seriously consider Corey’s counter-proposal. “Very well,” he said. “Then let us turn it into a game. We take turns asking questions so long as no one lies. No avoiding questions. No half-truths. Just full honesty.”

“I will start, then,” said Imperious. He reached down and brushed his thumb along the side of Corey’s face. Corey couldn’t help but shiver at the touch. He could feel his cheeks heating up. He wasn’t used to such intimacy. “Did you always want to be a hero?”

“No,” said Corey. There was a time when he was a normal kid, with the kind of dreams normal kids had. He had gone through the firefighter phase, the doctor phase, and the starship captain phase just like everyone else. “My turn. Did you always want to be a villain?”

“I discovered that the idea of controlling other men made me hard when I was fifteen,” said Imperious. “I realized I had powers and started using them to that end when I was seventeen. The math is relatively straightforward from there, I think. Basically, yes. Hmm. Why did you want to become a hero?”

Corey chewed on his bottom lip. Imperious, it seemed, had started out young. The villain seemed so unapologetic about it, too. “I discovered I had powers,” he said. “I felt that I had an obligation to help the people that don’t. Do you ever feel guilty for what you do?”

“Why should I?” said Imperious. “Rhetorical question, of course.” The smile that played on his lips was cool, almost as cold and remorseless as the look in his eyes. For whatever reason, that gaze, so utterly devoid of mercy or regret, made Imperious even hotter in Corey’s eyes.

“If anything, I think that I have done my subjects a favor,” said Imperious. “I have merely helped them discover and indulge in a need that they did not know they had.”

Corey blushed. The tips of his ears felt hot. He felt like he was losing already, despite the game not having any clear definition of winning and losing. And Imperious hadn’t even asked another question yet.

“You know,” said Imperious, “I find it rather interesting that you said being a hero felt like an obligation to you, not a calling. I have talked to many heroes before I made them mine, and many of them said that they were called to protect the people. The idea has always felt obtuse to me. You are refreshingly honest. Does being a hero not make you happy?”

Corey hesitated. He didn’t want to lie, but he wasn’t exactly proud of the truth. He had managed to hoodwink himself into believing that being a hero did make him happy, but the notion was fundamentally a self-deception. Answering honestly would mean acknowledging that he had been lying to himself.

It does, was the answer that Corey wanted to give. But Imperious was right. There was no use lying. He had nothing to lose by being honest. It wasn’t like this conversation would ever leave the room. “No,” he said. “I haven’t been happy being a hero for a while. It hasn’t made me miserable, or anything, but it hasn’t exactly made me happy either.”

Corey felt a pang of shame. Heroism was supposed to be a noble thing. And Imperious was right in that most heroes thought of it as a calling. He should have been able to find happiness in what he did, but even now, he couldn’t. He hadn’t been able to for a long time. “Why do you do this to people?” he said.

“To men, little thundercloud,” corrected Imperious. “I do this to men. I could not be less interested in controlling women the way that I do men.”

Imperious smiled and brushed his thumb over Corey’s lip. Corey, instinctively, kissed it. “I love to do what I do, to put it simply,” said Imperious. “This is not about taking over the world or seizing power. This is about what makes me feel good.”

Corey allowed his lips to part as Imperious’ thumb pushed into his mouth. He swirled his tongue around it and watched as the outline of Imperious’ cock, obscene in its size, slowly grew out along the curve of Imperious’ thigh.

“This is the kind of thing that I love. I enjoy watching men become pliant to my whims. I love to watch them become like clay for me to mold,” said Imperious.

Imperious traced his thumb along the line of Corey’s teeth. "Forgive my presumption, but I like to think I have come to know you quite well in our time together. This is the kind of thing that you love, too, isn’t it? If only from the other side of the equation.

“You love the idea of a man’s will gradually eroding. The thought of a man going limp as he surrenders to me makes your cock jump.” Corey moaned. “Where I love knowing that a man belongs to me, body, mind, and soul, you love the idea of being owned in the totality of your being, do you not?”

Imperious pulled his thumb out of Corey’s mouth. Corey licked his teeth, missing the touch. A single glistening strand of spit connected the pad of Imperious’ thumb with Corey’s lower lip. It shook, and then broke, as Corey hissed “Yes…”

This is the story of Corey Cooper A.K.A Tempest’s enslavement to the supervillain Imperious, improved and edited for publication, with brand new scenes that show a side of the story not told in the Super Sucker series.