Plus 3 – Genie’s out and about

Plus 3 – Genie’s out and about

Genie heads out of the mansion of sex and goes to a local mall to find any unsuspecting wishers. He meets Noah at the moment he’s dumped by his girlfriend

I’ve loved Derek Williams stories for ages and wanted to try my hand at a plus 3 story. All credit goes to him for such an awesome idea. Check out the inspiration to this story Plus 3 -[the original] Plus 3 - [in the library]

Genie had been enjoying the new hairy bro Matt he’d created out of the slob Matthew he’d met a few days earlier. Since then, he’d given Matt a mansion full of sex-crazed studs who still mostly worked their old jobs, while bringing the dosh back for sharing in the up keep of this true ‘playboy mansion’. Genie was enjoying the freedom Matt have given him to grant as many wishes as he liked for other guys, and so he’d been kind in the way he’d granted Matt’s wishes. His addition of 3 words had not overly changed the deep desire of each wish but he had added a few cherries on top (for himself of course). The other major difference from the last 3 millennia was that genie was now visible to everyone, but as an over-muscled hairless and topless stud. Matt’s wish meant that people who desired him would come up to him and start feeling his solid muscles, and hard core. He didn’t mind this at all, even from the ladies.

He left the mansion and went for a spin in one of the sports cars parked outside. Of course, every new gay stud wanted their old practical car, transformed into the latest sports models, and of course their wishes were granted, and then some. He parked up at the local mall. For no reason other than to listen out for stray wishes. The humans had no idea how much they wished out loud. But it was internal processors who annoyed Genie, because they kept their thoughts in their heads. He was about to head into a coffee bar when he heard a couple in the middle of a flaming row. A women with red long hair who kept fit, was yelling at an average looking 23 year old guy who obviously looked after his body through good food and regular exercise. Not particularly muscular, but lean.

“Noah, I hate you for what you’ve done to me. You never listen to a thing I say, you never tell me what’s going on in your thick skull and you’re so insensitive. It’s over. I wish you’d tell people what you want” Genie smiled, this was going to be fun. Time skipped a beat “I wish you’d always tell hot people what you secretly want” And the women stormed off.

Noah looked stunned. What had he done, he wasn’t even sure. He’d obviously missed something. He really liked her, and they’d been dating for 4 months. “Man, sounds like you’re having a bad day. Let me buy you a coffee” Genie kindly said Noah looked at the topless muscular stranger and not having much will power left, accepted the kind gesture. In the queue Genie asked “Man, how are you feeling” of course he knew this guy now had no choice but to spill his guts, after all, he was the hottest guy around. This guy didn’t have to be gay to see that. And between ordering their cappuccino’s and finding a seat Noah ran off exactly what he was thinking “I thought she might be the one. We got on well, she was always giving me gifts and making me great food. She would listen to me tell her about a hard day at work, and I thought we were great together. But apparently, I’ve done something to hurt her. I haven’t slept with anyone else, I haven’t physically harmed her, and I didn’t think she was like this. I don’t know what I’ve done”

Man, genie was bored with human relationships. Obviously, he’d not given as much as he’d got in this relationship. But young Noah didn’t have a clue. “Ok man, maybe it’s all her, maybe it’s a bit you. Who knows? But what do you wish anything would change?” “I just wish… damn it’s noisy in here. I wish everyone would be a bit quieter so I could think” Zip “I wish everyone would be well muscled and a bit quieter so I could think” And the transformation started. From the chubby barista who lost his flab and gained a chiselled physique, 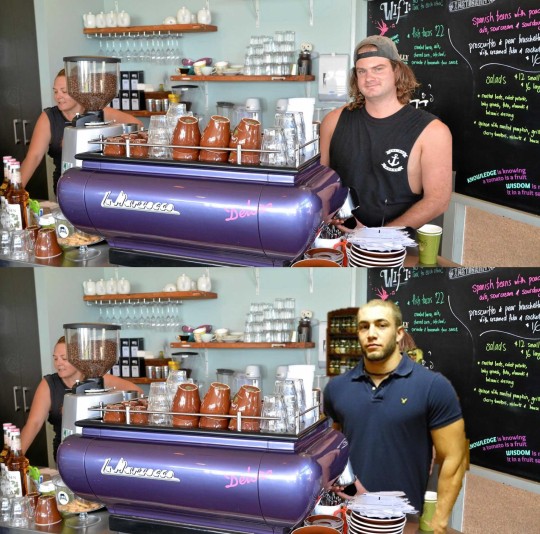 to the college students in the window who all now obviously hit the gym for a good few hours every day. 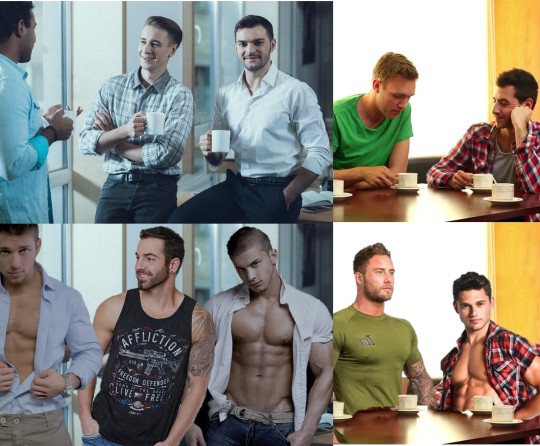 The women too, lost fat round their bellies, love handles disappeared, and strong muscles replaced arm wings. The old men in the corner, also became muscled 70-year olds, and even the old lady of 80 was now the fittest in her Pilates class. Of course, the changes affected Noah as well. His arms swelled in his sleeves, his abs cobbled, and his butt popped out a little. He and everyone else were now speaking quietly. 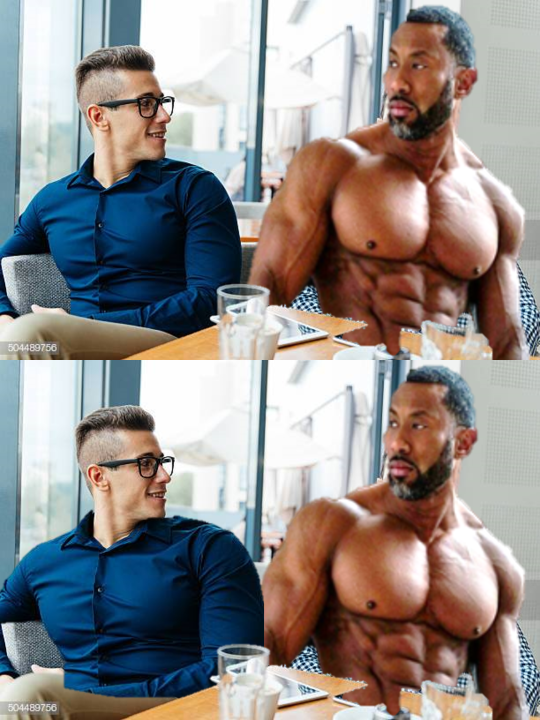 Genie smiled, and Noah was none the wiser. For some reason Noah found it was easier to think with good looking people all around. He looked over at the hot gym clothed chicks a couple of tables over. They were speaking softly, and he just looked at their chests, and said “man, I’d love to loose myself in those breasts. I wish everyone in here had a great chest.” Zip “I wish everyone in here was promiscuous and had a great chest.” Every chest, whatever age grew. The lads in the window gained jutting firm pectorals, and the girls gained bigger fuller tits which filled their sports bras to the max. The guys had noticed the girls, as the girls had noticed the boys. Noah licked his lips

Noah until now had been unaware of his wishes and their consequences but now Genie allowed him to see the fruit of his desire. The guys suddenly stopped looking at the girls and were filled with passion for each other and their members. One of them disappeared under the table and pulled his pals cock out of his pants and started sucking. His friend just sat back in bliss, while the other 3 started making out.

The young studs were groping every part of each other in a sexual frenzy unlike anything they’d ever felt before. It wasn’t long before one of the 3 making out was on his knees before his two pals. The 5 guys were completely unaware of the coffee bar now, and only focused on satisfying the deep hunger for sperm deep inside them. They certainly didn’t care that the girls, Noah and the genie could see everything. The girls were disgusted. The studs they’d been eyeing up were now obscenely getting each other off. Noah said to Genie

“What the fuck. I know I made that wish, but for it to happen, and … oh it’s so gross.” “What’s gross man? 5 guys pleasuring each other. You don’t like what you see?” “And to think I wished for it. Let me try something. I wish those girls were totally into me” Blip “I wish those girls were totally into hunky tattooed bodybuilder me” Genie new it was an in-elegant wish, but it would do the trick

As the girls attention moved to him, his body grew bigger and stronger. Instead of being lean and muscular, he was now a powerlifter who loved competing in competitions. Tattoos started growing across parts of his chest, his biceps and his arms. He would be able to explore all of these later. He looked down at his body and said “Fuck, it worked. I love being a bodybuilder, and the Tats I can see look so hot. And fuck, the girls are coming over.” 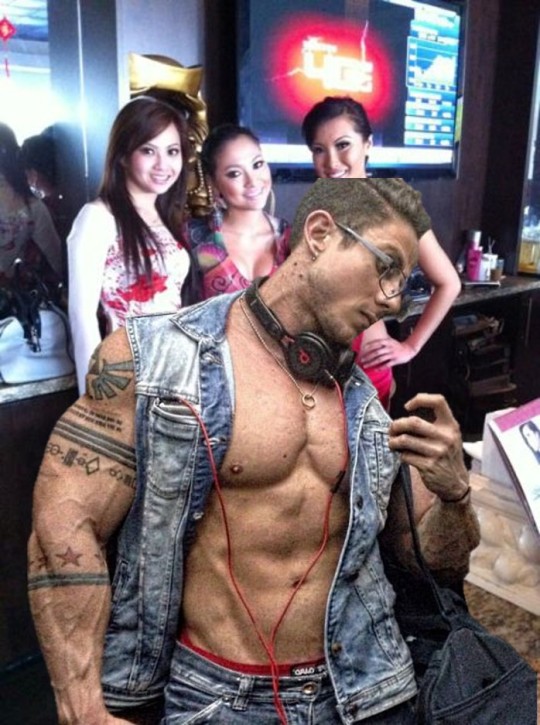 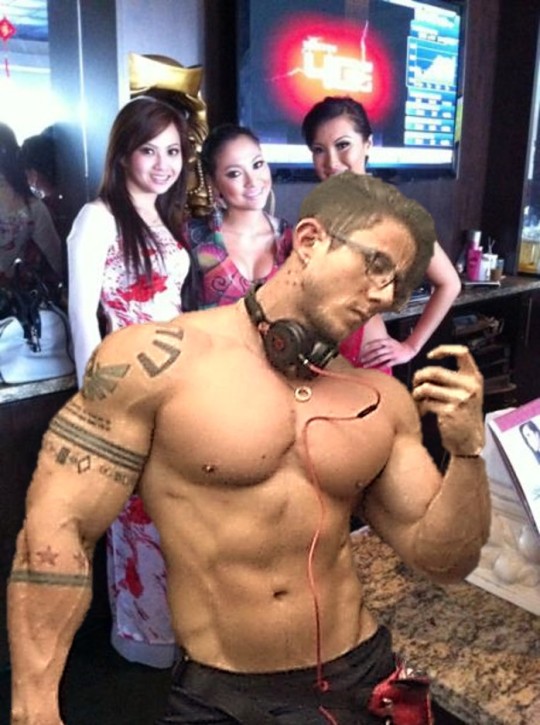 “I wish I had a massive cock” Zip “I wish I had a massive cock only for guys” This was what Genie had been gunning for the whole time, but he enjoyed waiting patiently. And he looked down to see his member grow and expand into a fat and long pleasure tool, but it didn’t get hard. The girls continued to feel him up, but instead of his cock filling with blood to fuel their imminent love making, it stayed flaccid even at it’s massive size. “this is weird, my wishes are becoming real. It’s so cool. But it’s not exactly what I want”

He then looked at the girls, and was surprised he’d allowed them to feel him up when it gave him no pleasure. “Sorry ladies, I’m not into chicks. Those dudes are more what I’m into.” He looked over at the 5 college studs who weren’t interested in studying anymore. “But I could see the extent of the wishing by making you both…. But first. I wish I was rich” He’d finally twigged. Whatever was causing the wishes was giving him unlimited ones. zip “I wish I was a pornstar and rich” And his life was changed yet again. He looked over at Genie and said, “you’re more my type handsome. I wish that no-one cared that I’m gonna fuck you, or that we’re naked?” Zip “I wish that no-one cared that I’m a slut who’s gonna fuck you, or that we’re naked?”

Genie rarely bottomed, but it was Noah’s wish after all, and it would be fun. From now on, no-one minded that Noah walked around either semi or completely naked, and accepted it as very normal. Many pornstars were only up for fucking on camera for a pay cheque. Not Noah. He loved being a gay overly muscled slut. He both loved fucking other guys, but also wanted to be filled himself. Noah’s member grew hard instantly. Genie stripped and showed his perfect muscled arse to his fucker. Noah plunged right in. His first time inside a dude, and Genie was surprised at how much he enjoyed this. Genie’s plump bubble making the perfect shape for Noah’s tool. Noah had no way of knowing that it was unusual for a dude’s arse to independently move along his shaft while he was fucking, almost like Genie’s butt was wanking Noah’s cock while he was fucking. As the pleasure intensified, he looked at the girls and said “I wish you three were hot dudes” Blip “I wish you three were hot bulging thick dicked dudes”

And their busty breasts became more set in their bodies, as their shoulders broadened out, their builds becoming less hourglass and more jockey. These were three powerful men, and they now had the trouser snakes to prove it. And the jacked up beauties started exploring their new sexual partners impressive body. 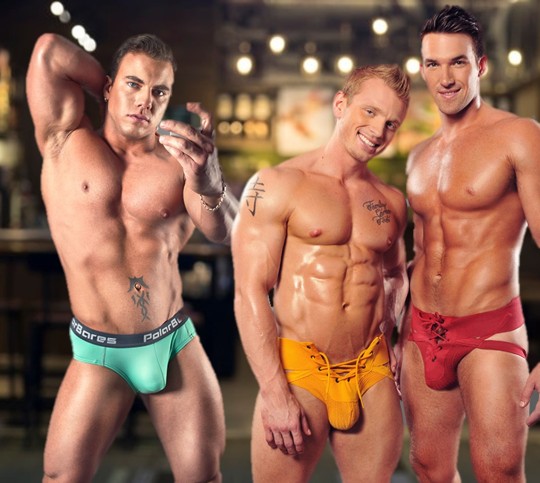 Genie got off the table, and left the sex-crazed coffee bar behind him and decided to explore more of the mall.